Do you ever sit down to write a blog post (if you have a blog) and everything sounds horrible? Why would I start out with this? That’s not exciting or enough to capture someone’s attention. I’m having that moment right now. I’m going to keep typing and we’ll see if we find ourselves in the end.

I had leftover fabric (again) from another project I made. That other project was baby clothes. No, I’m not pregnant. (yuck!) The clothes were for a friend of mine. She’s a fellow cat lady and this is her second kiddo. It’s a girl and who wouldn’t like to make a mini sized dress? Mini stuff is so cool. Expect mini humans… yuck…

I guess we could talk about the baby clothes first. I mean, why not? I seem to be meandering through this post anyways. Let’s get sidetracked!

I found a few free patterns for baby stuff. I’m a little wary about free patterns because sometimes they are just a hot mess. I know nothing about babies so if it comes out the complete wrong size, I’m not going to know any better. Having said that, these patterns come from Brindille & Twig . I chose the Ringer Tee and the Bummies. Which I don’t like that name “bummies”. What does that even mean? I called them scootie pants. I’m not even sure if that’s any better… So my thought was to take the ringer tee and expand it to look more like a dress. Pretty much like making an a-line skirt.

The shirt was easy.  I extended and expanded like I planned. I even cut a little strip to add at the bottom for a ruffle.  Also, quick planning on my part. If this kid comes out a boy, that’s okay because we’ll just chop off the bottom.  None the wiser, ya know? 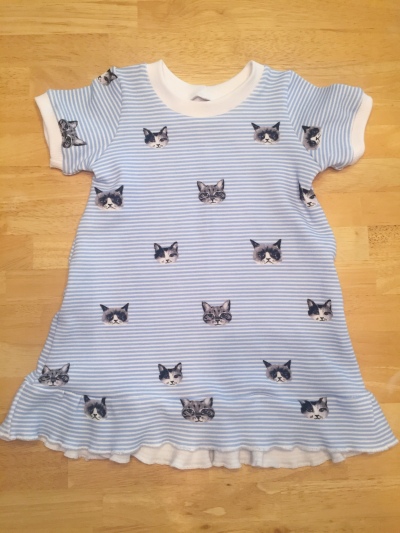 The scootie pants, I made as is. You need something to cover the diaper right? I don’t know… I just assume you wouldn’t want to see that. Wait I lied. I didn’t make them “as is” because there’s a little drawstring.  I didn’t add that. These are so small that I can’t imagine needing to strangle the baby’s mid-section with a drawstring.  I know I don’t like that tight, chubby feeling.  I’m sure it’s the same for babies. 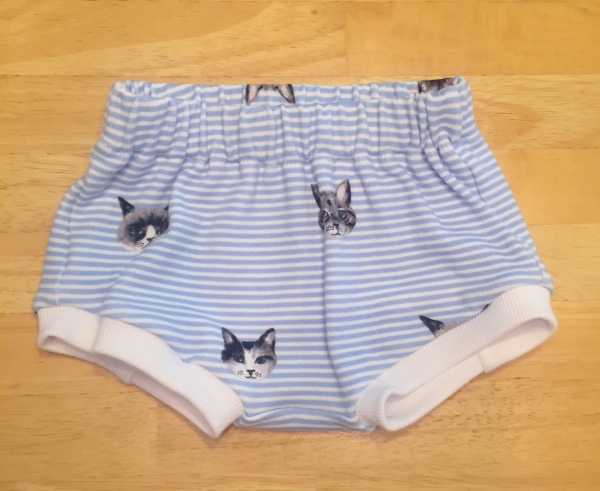 Okay, now onto the real reason I was writing this post. I made a shirt for me. The fabric I bought for the baby stuff was so cute that I couldn’t pass up making myself something from it too. Let me tell you, that I really squeaked this one out. Btw, fabric came for Joann Fabrics and yes, I had a coupon.

The pattern is the Briar Tee from Megan Nielsen Patterns. The thing I do not like about this pattern is the super low scoop neck. I feel that it flops all over the place and it pisses me off. I bend over and lookie! There’s my bra. No, just no. Needless to say, I always change the neckline of this pattern when I use it.

I think I was still vibing off the baby ringer dress that I ended up making myself a ringer-tee too. I do love ringers though so it’s not super big surprise that’s where my brain went. I made the bands for the arms a little smaller than the width of the fabric and it gave it a little bit of poof. Not intended, but I’m not mad at it. 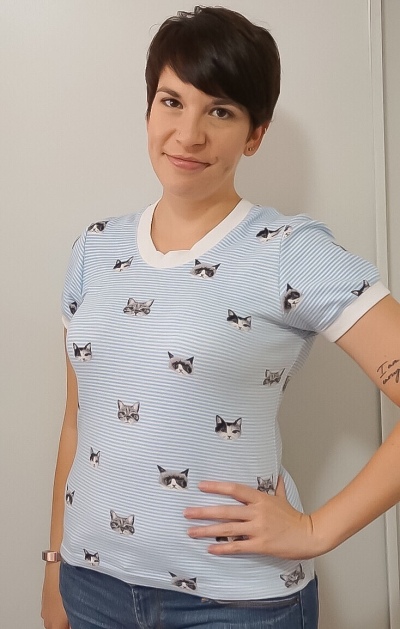 There really isn’t much more to say than KITTIES!!! 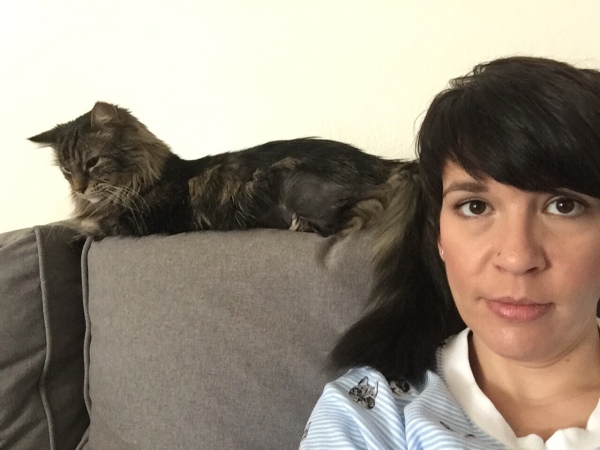 To finish off a post about kitties, here’s one of mine: Freckles aka Fluffy Tail.

While visiting my parents, my mom decided to dig out an old dress and force it upon me. “Here make something with it!” Ya know, because I make magic from old ugly things.  I did not take a picture of the dress before I started hacking it apart. I even told myself to do so.  I was watching tv and thought I could rip it apart while I sat.  Picture be damned! The dress was a long sheath dress with a slit on each side.  Nothing exciting.

I knew I had enough fabric for a shirt and possibly a skirt or something else. Hmm… I started with the shirt. I wanted to make a peplum top.  I fished out my pattern Simplicity 1425. I made this shirt before and it wasn’t too bad of a sew.  The dress already had the proper neckline and it was sleeveless so I really only needed to worry about the princess seams in the front, darts in the back and the peplum. Talk about a lazy sew.

Sorry for the deodorant mark! lol I’ve worn it already to work and we haven’t made it to wash day yet. 🙂

I laid out the pattern on the top and realized that the pattern wasn’t going to work because the fabric wasn’t wide enough so I decided to wing it! I put the top on and starting pinning it on myself. I picked where the princess seams should sit and pinned the line on one side. I cut along the pins and left a 1/4 seam allowance. (well I tried. It was definitely not that big) I took that line and mirrored it on the other side by folding the piece in half and marking the cut in chalk. 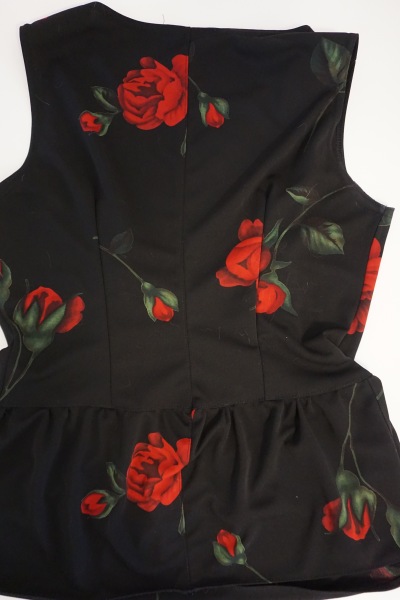 I was able to follow the pattern for the length, darts in the back and the peplum.  I did have to cut the peplum short in width because I wanted to conserve as much fabric as I could.

I made sure when I was sewing it back together, that I unpicked the hemmed edges.  I could have sewed it up without doing so but it would have left funny lumps at the joins.  Taking a few extra minutes to unpick is so worth it! Instead of the pleats on the peplum, I gathered the piece to fit the width of the top. 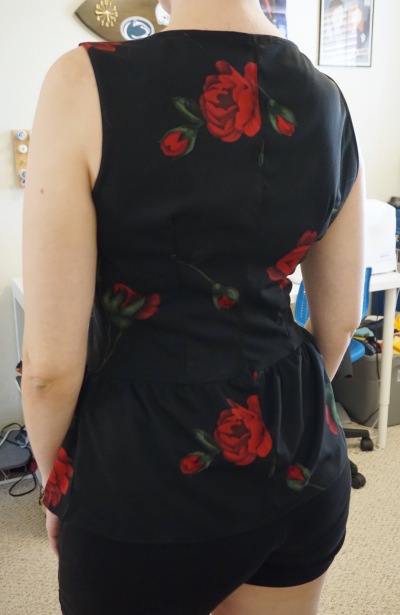 I was super worried about how to do the closure in the back.  I had a plan of adding an extra piece down the middle and sew it closed to about the waist and do some snaps to finish out the length. It was going to look like the extra piece was hiding buttons or a zipper but when I tried it on with the extra piece, it was too big.  I was able to sew the back closed and I can still slide it on.  The fabric has a bit of stretch that is just enough to shimmy down into place.  Score! 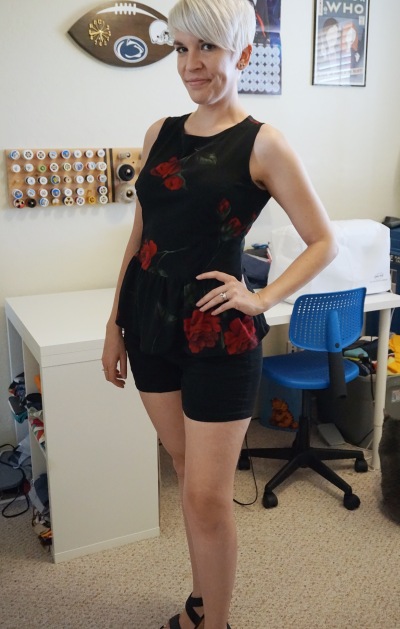 As if a cute top wasn’t enough, I have enough to make a pair of shorts.  Yup, shorts.  Like I mentioned before the fabric has a bit of stretch so why not!  I named them Rose Butt before I even started on them.  Because that’s just what you do.

I used my handy dandy workout capri pattern I’ve used a bunch of times.  They are slip on style and have an elastic waist.  Unfortunately when I made them the legs were a bit too tight.  So tight in fact, my fat started to try to decide above or below the hem.  It was not pleasant.

Tis a bit blurry but you get the idea.

Instead of just canning the whole idea, I decided to revisit the dress’ start.  It had slits.  I can just add slits to the shorts and bam!  No need for my fat to worry about not being with its other friends.

Now I will tell you, this will be the one and only time they are worn together.  That’s so not cool.  I want to make a big, swingy top to go with them.  Tight on the bottom but airy on top.  I prefer this rule in my life.  Never two tight items or too lose.  It just doesn’t work for me.  I feel like I’m sharing a lot… too much? Oh well. 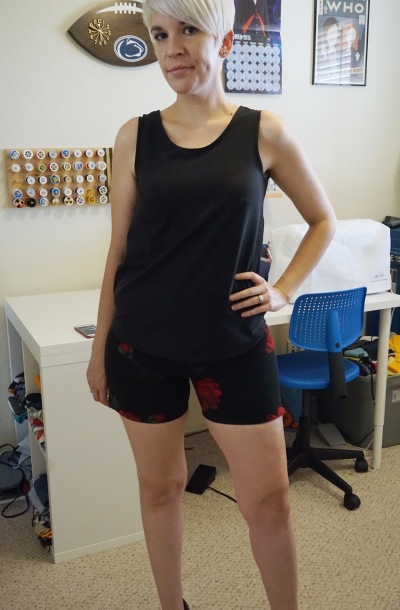 I didn’t want to wait until I decided what the top should look like before sharing the shorts so I did pair it with my Blackout Sorbetto for another look.  Two for one special!  Out with the old and in with the (two) new.

Vintage Glamour for the Modern Sewist