Okay, that was a lot to explain that I’ve been working on “on the fly” stuff rather than planned. I’m proud to say this post is about one of those neglected planned projects. You’re probably wondering what finally got my ass into gear. Well it’s Revenge of the 5th my friends. Yesterday was “May the 4th” and I realized I have the perfect project to complete for the following day.

Last project (Sleep Shirt) was my first try with an appliqué. Granted, it is not fun to sew those guys on but I’m not one to be deterred. I decided to cut an AT-AT Walker from the remaining Star Wars fabric I have from JoAnn’s. For non-nerds, the AT-AT Walkers are used by the bad guys and they look like big mechanical animals.

I drew up a tank top. I decided not to use a pattern. A simple tank should be easy enough to create. 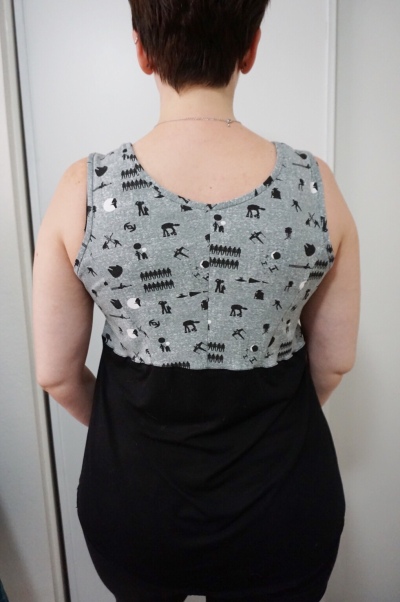 I used more leftovers as the top of the tank. I didn’t want a full black shirt with an appliqué. I wanted something with a little more matching. The front and back both have the Star Wars fabric at the very top. I had to get creative for the back since I was using leftovers. I used four pieces to create the back. I don’t think it’s a big deal and it looks fine. I also cut strips of the fabric to create a trim on the arms and the neck for a nice clean look.

The bottom is a soft rayon/poly blend that I also picked up from JoAnn’s. I cut from the outside edge of the top pieces and down at a widening angle to the desired length to make the bottom nice and roomy. The bottom is also rounded and the front is a tid-bit shorter than the back. 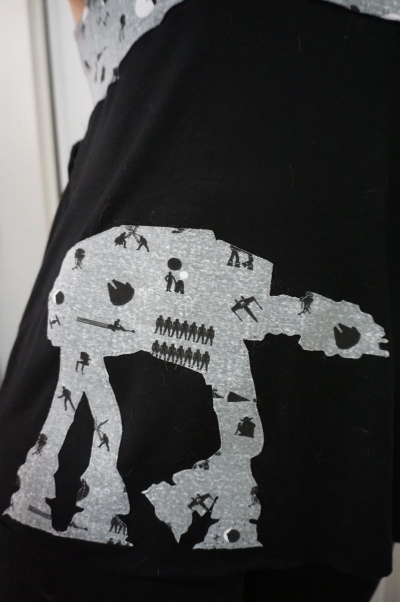 I ironed my appliqué on the bottom and then stitched around the edges. It’s not perfect because there are so many angles around the Walker. Still no big deal. The thread blends pretty well with the fabric. 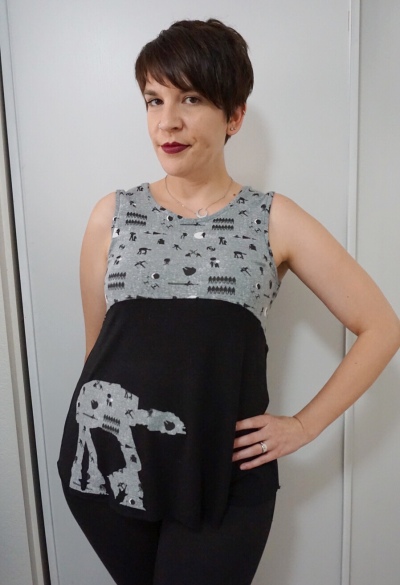 That’s it! I have a new Star Wars tank top. Pretty comfy and quick to make. I need to quick dragging my feet on things! lol

Sewing my way to Jamie-Made every day